“Another story on what most Americans don’t know about the Navy’s role in the Vietnam War?”

For the crew of USS Rich (DD 820) January, 28 1973 had finally arrived. On the mid-watch, we brought the new day in with an attack on Highway 1 in the Quang Tri province of South Vietnam. The North Vietnam Army (NVA) was pouring truckloads of troops, artillery, and armored vehicles down the highway south of the DMZ.

By the end of the watch, we had moved our ship near shore to an area of shallow water just north of the Cua Viet River entrance in order to increase the effective range of our 5-inch/38 caliber guns inland. Between 0030 and 0630, we fired 303 high explosive (HE) rounds onto spotted targets along the highway.

We commenced fire again at 0633. We kept firing on targets until cease fire was called at 0745. We had shot another 150 HE rounds between 0633 and 0745, 15 minutes before the cease-fire agreement between the United States and North Vietnam went into effect at 0800 (local time), then it was all over. At 0747, the captain ordered the ship to come around to a new course of 125 degrees, speed 15 knots. Our ship began to move away from the coast of Vietnam. The orders for the ship were to move out to a waiting station offshore and rendezvous with USS Horne (DLG 30) as part of CTG 75.9.

After the cease fire agreement had gone into effect our ship spent the next several days at a waiting station was about 50 nautical miles out in the Gulf of Tonkin, almost due east of Dong Hoi, North Vietnam. The time at the waiting station area with USS Horne was spent essentially patrolling the area running along 25 nautical mile legs, staying roughly parallel to the North Vietnam coastline.

On Wednesday, January 31, we learned what our near-term fate would be. Our ship would rendezvous with USS Shasta (AE 33) for Standard Tensioned Replenishment Alongside Method (STREAM) high-line ammunition on-load, then to USS Milwaukee (AOR 2) for a fueling at sea (FAS) underway replenishment. After completing the FAS and the ship was completing the breakaway maneuvers from Milwaukee, the Executive Officer (XO) walked over to the ship’s 1MC intercom and picked up the microphone. Then he said, “Attention on the Rich, this is the XO. I am informing you that on completion of this FAS with USS Milwaukee, our ship is detached from CTG 75.9 and we are to proceed independently on duties assigned to the port of Hong Kong for a 10-day port visit.” Judging from the smiles of happiness on everyone’s face on the bridge, you would have thought the XO had just said he was going to give everyone a million dollars each.

Later, we learned there was more to it than just the port visit to Hong Kong. After Hong Kong, the ship was to proceed to Yokosuka, Japan, for a seven-day maintenance and ship repair period. Then we were to depart Yokosuka, Japan, on February 17 for the passage to San Diego, CA. From San Diego, via the Panama Canal, the ship was projected to arrive back in Norfolk on or about March 23, 1973. Now that was the kind of news everyone wanted to hear. For those of us on board USS Rich, our war was over.

Our ship departed from an area east of Yankee Station[1] on February 1, on the mid-watch bound for Hong Kong. The passage plan distance from the ship’s departure point to Hong Kong was only about 650 nautical miles, so at a speed of 16 knots, it would take us just a little over 40 hours of steaming to be at the approaches to Hong Kong Island. On February 3, at 0900 our ship made up to a mooring buoy outside of the main shipping channel in Victoria Harbor. Since the ship was moored to an anchored buoy and not to a dock, the engineering plant was going to have stay lit-off. The ship’s crew would be in the three section duty rotations while in Hong Kong. Other than on-duty days, it would be holiday routine for the crew.

Once the ship was moored, from the bridge we could stop and take in the view of Hong Kong and Kowloon. In 1973, Hong Kong was still a British Crown possession. The view of Hong Kong from the harbor looked like walls of tall skyscraper buildings in front of a backdrop of taller, steep mountains. To go ashore in Hong Kong from the ship would require water taxis that would run continuously day and night. Kowloon was an urban area in Hong Kong comprising the Kowloon Peninsula and New Kowloon. The only way to reach Kowloon from Hong Kong Island was to take a ferry boat across from Victoria Harbor.

My duty section had the duty for the first day in Hong Kong. I was on the first quarterdeck watch until noon. Just before noon, a sampan came alongside the ship and tied up at the bottom of the ship’s accommodation ladder. A small older Chinese woman, standing no more than 4 feet 6 inches tall, came up the ladder and, once on the quarterdeck, said her name was Mary Soo. Mary Soo then demanded to speak with the ship’s first lieutenant. I didn’t realize it at that moment, but we had just met the famous Hong Kong Mary Soo.

Mary Soo was on board to make a deal to paint the entire exterior of the ship. Navy regulations prohibited paying foreign nationals in cash for work accomplished on the ship, but other ways of compensating workers like Mary Soo were easily found. Since a good part of the crew would be ashore every day on liberty, most of the food prepared in the galley would go to waste. This was where Mary Soo came in. Her deal was to paint the ship in exchange for all of the ship’s leftover food. The first lieutenant quickly made the deal with Mary Soo.

After the deal was completed, within an hour, a small fleet of sampans arrived alongside the ship, and a small army of mostly women filed on board to start painting. The ship provided the paint, and Mary Soo’s crew did the work. Mary’s crew of mostly young Asian women would paint the ship’s sides from small sampans. To apply the paint, they used old cloth rags instead of paint brushes or rollers. After breakfast, lunch, and dinner, women from Mary Soo’s group came on board and were allowed to go the galley to collect the food leftovers.

No one really knew how old Mary Soo was. One of the boatswain mates said that as far as he knew, she had been painting Navy ships calling on Hong Kong for decades. The story as we heard it was that Mary Soo served the food in a restaurant she owned and only recruited orphans to work on her crews. She used the profits from her restaurant to pay her workers. Recruited young female orphans were sworn not to engage in prostitution or to date sailors, and if they were caught doing either, Mary Soo would immediately fire them.…To read “Striking Eight Bells,” use one of these links to booksellers: Amazon.com: Books, Barnes and Noble Booksellers, BAM –Books A Million and Smashword.com eBooks. 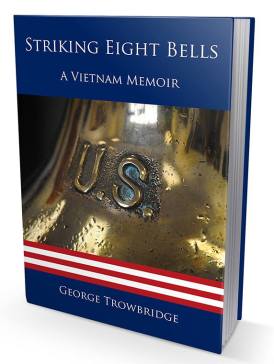 The stories in these posts and the book; “Striking Eight Bells: A Vietnam Memoir,” reflect the author’s recollection of events. Some names, locations, and identifying characteristics have been changed to protect the privacy of those depicted. Dialogue has been recreated from memory. Dates, times, and locations were recreated from declassified U.S. Navy records and others. Photographs used are either public domain or owned by the author. Illustrations and maps used were either created by the author or in the public domain. The stories in these posts and the book are solely the opinion of the author and not the publisher, Richter Publishing, LLC.

*Image was found in public domain or it could not be established after reasonable search, that any claim existed to the image. Image used for illustrative purposes only and is not the property of the author. Where ever possible credit for the image is indicated in the caption. #Scanned image from USS Rich DD 820 Cruise Book, 1972-73 WESTPAC Cruise.

3 thoughts on “The Cease-Fire, On To Hong Kong!”

This site uses Akismet to reduce spam. Learn how your comment data is processed.